For Underprivileged Women, Menstruation Is More Than A Monthly Inconvenience

While serving time in jail, Emma King had to go to great lengths to find something as common as tampons. She and other women in prison eventually learned how to make their own.

“You would take toilet paper and, like, shape it however you wanted to be, like a tampon,” she said. “And roll it up and get it wet and then roll it more and then let it dry for, like, two days and it would make it hard to where you could use it as a tampon.”

She and other female inmates did this frequently, due to the high price of tampons: a necessity she said nevertheless cost $9 a box.

While inmates did receive pads, King says they were bulky and uncomfortable, and commissary limited how many an individual could receive at a time.

King doesn’t feel it was right for her female hygienic needs be ignored.

“I get that you’re in jail and you did something wrong to be there, but I don’t feel like they should take away from the basic female hygiene necessities for females,” she said. “I mean, it’s just how we’re born, this is what we do. This is not something we should be punished for.”

Access to tampons is a problem in jail, but also for many women living in poverty. The cost of tampons and pads can be a strain on a tight budget. Yet donations to homeless shelters and social service agencies often fail to include these products. A growing movement seeks to destigmatize periods — and get supplies to women who need them.

One such event took place recently at the University of Evansville. Three UE students, Alexandra Curren, Gina DeLise and Sierra Miller, decided to organize an event to raise awareness of underprivileged women’s needs for menstrual products.

“The problem of homeless or otherwise underprivileged women not being able to afford sanitary products has just bothered me for a really long time,” Curren said.

All three are theatre majors. They thought: What better way to raise awareness than through music and art?

The three created Jampon: A Jam For Pads And Tampons, a sort of feminist talent show showcasing acts and events for and about women’s empowerment. Among the acts: an acapella Lorde cover, a stand-up comedy routine and the reading of an original poem — pulled from the pocket of a pair of hot-pink pants.

The jam included an art and baked goods sale as well and raised $650 which the women donated to the YWCA for feminine hygiene products.

Organizers encouraged attendees to buy and donate tampons or pads rather than pay the admittance fee.

Curren said she hoped the act of buying the products themselves would help break down the stigma associated with conversations about periods and feminine hygiene products — and in turn help women in need.

“A package of tampons or pads costs a lot of money,” said Evansville YWCA CEO Erika Taylor. “You’re trying to figure out, ‘do I get milk for my child?’ or ‘do I or we eat dinner tonight?’ or ‘do I have pads?’ That is a decision that women face quite regularly in low-income [situations] or on the streets if they’re homeless.”

She said female hygiene products are a prized commodity for those in need. They not only help manage women’s periods, they make them feel like respected human being.

“The first thing that comes to mind is your dignity. Your dignity’s at risk,” Taylor said. “I mean, that you have to sit there and create some kind of mechanism to deal with your monthly period … it’s just something that I think all women can identify with.”

Despite a feminist sea change during the last few years (NPR dubbed 2015 “The Year of the Period” and royal-to-be Megan Markle has made reducing period stigma a mission), menstruation is still in many circles considered a topic that is at best awkward and at worst, gross and taboo. Girls’ magazines still routinely run “embarrassing” stories about periods, and women hide boxes of tampons or pads from their boyfriends or ask them to be double-bagged at the checkout line.

“There’s this taboo around those products, that a lot of women and people in general feel embarrassed by those things,” said Jampon’s Curren. “It’s something that we’re told to not talk about and keep to ourselves.”

That stigma means the issue doesn’t get talked about, a silence that has real consequences: Advocates say that the products are among the most-needed items at shelters and charity organizations. 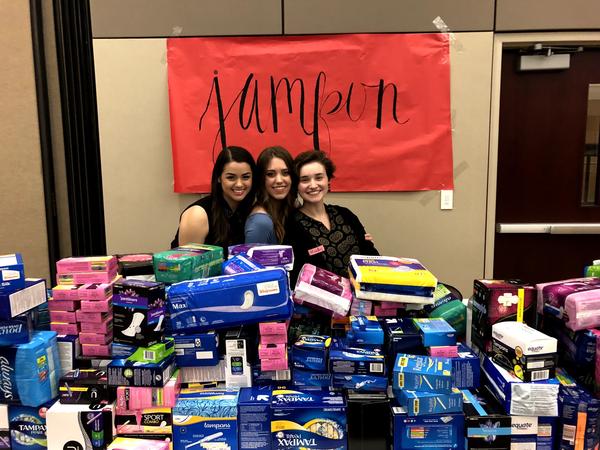 Curren and friends got positive feedback from the school and the community. Close to 200 Jampon attendees donated 208 boxes of pads and tampons and $650 for the YWCA. They plan to host another Jampon next year. And they hope it keeps going even after they graduate.

“It could be a conversation of passing it down to some underclassman or maybe, if we all ended up in the same place after graduation, maybe we continue it there or maybe both," Curren said. "But we’re hoping it can be an ongoing thing.”

For those who don’t want to wait until next year, several charities around the state help women receive the products they need each month. Indiana-based charities such as Project Purse and Support the Girls - Indianapolis accept both monetary and product donations.

Jampon is just one of the grassroots drives that have been popping up at colleges around the country. Students from Chicago to DC have been organizing donation events for tampons and pads.

Halfway house resident King said she’s appreciative of efforts like this being made for women like herself.

“It’s really amazing they would think about something about that and that they would have that in their mind and think about people are struggling and going through things like that and want to help,” she said.

This story was produced by Side Effects Public Media, a reporting collaborative focused on public health.

A Home For All Ages: Can Tiny Houses Help Older People Age In Place?

A small house and a big idea are coming to the University of Southern Indiana.

The university announced it’s building a small, modular home to demonstrate how the tiny housing model could make independent living accessible for people of all ages and abilities.

Jampon: Jamming Out For Female Hygiene

Three University of Evansville students are hoping to make a difference in female hygiene for low income and homeless women in Evansville.

Jampon – jamming out for pads and tampons – will collect boxes of tampons, pads, or liners as an admission fee and then donate what’s gathered towards the local Young Women’s Christian Association.

“The problem of homeless or otherwise underprivileged women not being able to afford sanitary products has just bothered me for a really long time,” said Alexandra Curren.

After letting funding lapse for 114 days, the United States has reached an agreement for funding CHIP, the federally-run health insurance program for children and pregnant mothers.