Earlier this year the City of Owensboro lost an influential activist.  Mareea Thomas reports about Rev. Ron Holmes' impact on the community.

Rev. Holmes, Pastor of Asbury United Methodist Church died on February 6, 2016. I traveled to Owensboro to learn about Rev. Holmes and the impact he had on the community. Not only will you hear from members of the community who were close to Rev. Holmes, but you will also hear clips from Rev. Holmes’ talk at an Interfaith Discussion which was held in Owensboro.

DeMarcus Curry: My first impression of Rev. Holmes is the same as everyone else’s impression. He is crazy.

Rev. Holmes:   God sent me to Kentucky to wake y’all up. Yeah I’m wild and crazy.

DeMarcus Curry: My name is DeMarcus Curry, and I’m the musician here at Asbury United Methodist Church.  I can definitely recall one moment when I was in college, in our public speaking class we were told to do a commemorative speech about either a person, place or thing that has definitely impacted your life. And I chose to do of course Rev. Holmes and Mrs. Holmes during that time. And not only did I do that speech, but he actually showed up in class for that occasion. So that was definitely one of my most memorable experiences with Rev. Holmes.

Deputy Riley: Kenny Riley. I’m a Deputy Sheriff 27 years and a community activist here in Daviess County/Owensboro area.  I met Rev. Holmes when I was NAACP president. I was at a rally or some kind of forum and he was there.  He was new in town. He stood up and shook the boat really bad, which he would do that, and said that all the ministers around here needed to get on their job that they wasn’t doing their job.

Judge Castlen: My name is Joe Castlen. I’m a circuit judge in Owensboro. I can’t remember when I first met Rev. Holmes, but all of a sudden he’s part of my life. He’s in the court room. He’s all over the place. He’s in the community. You go to a community forum somewhere.  And he never hogged time. You know how some people go to these forums and they get up and you can’t shut them up. He would say his piece, and it was usually very insightful. And then he would sit down.

Deputy Riley: And what I liked about him, it was black people, white people, Hispanic people, he would always show up at jail, show up at court. If somebody needed him, he was there. And it didn’t just have to be members of his church. It didn’t just have to be members of his religion. It didn’t have to be religious people. If you were sick he would visit you in the hospital. He did have his convictions. If you had a child support case, that’s it. He thought you ought to pay your child support. He believed if you had the children you ought to take care of them.  Anything else he’d show up. I mean he’d show up for anything else he’d come, but he would not come to court for child support.

Judge Castlen: Well, he was one that urged you to live in your community and to reach out to others. Not to be a home body, not to be a wall flower. God put you here to live with other people, to respect other people, to help other people, and that was a defining characteristic of Rev. Holmes. No question about it.

Rev. Holmes: That’s why brother Black I get so upset when black folk sit at home and don’t vote. Our young people, are you understanding where Rev. Holmes is coming from now? You see them people got their butts tore up just so we could vote. And we gonna sit home and not go and vote? See that’s why I act like I act. You know sometimes you don’t understand.  Well why does he talk like that? Why does he act like that? Cause see I know this.  I know what it took.  I know the struggle that our people went through to get us where I am.  That’s why I get so upset with our kids when ya’ll act a fool in school.  Did you see them people kicking them people’s butts in the street, throwing water on them, dogs biting? They did all that so we could have these opportunities.  But ain’t nobody telling us this. They ain’t gonna tell you in the school system. They don’t want you to know who you are. This is not racism; this is realism.

Judge Castlen: There’s no one person who do what Rev. Holmes did. That’s impossible.

Deputy Riley: I think if everybody that knew him and that knew what he stood for, if they would get together then that could happen. But it’s scary thinking about him being gone and that he’s not there anymore cause of the countless lives he touched. The people that he took to the right that would’ve went to the left if it hadn’t been for him there. He did so much for the people, and you know with him gone there’s a cold void definitely. The members of the church have called. I’ve talked to them almost on a daily basis. It’s slowed down a little bit now.  You know the number one thing is what are we going to do?

Angelica Almanza: I’m Angelica Almanza, and I got to know Ron through the Intercultural Initiative with Bill. And I got to know him, and we got to be friends also.  I did not speak to him leading up to the suicide. I can’t even say it. And I don’t think he would’ve let anyone know. He was a very strong person. He was very strong. He had to be. He had the weight of everyone else on his shoulders.  And I wasn’t in his mind at the time. You know? We weren’t in there to know what was going on in his head at that time. So I cannot. I won’t judge.  I won’t make any assumptions.

Mareea Thomas: There’s no clear explanation, only speculation. He lost his wife. He was tired. Those are some of the thoughts I heard from the people I talked to.  Rev. Holmes was found dead in a car at a rest stop along I-64. The Spencer County Coroner confirmed that he died due to asphyxiation from vehicle fumes.

Rev. Holmes: But I feel like wherever you want to go it’s your life. You get one life on this earth. You don’t get a second chance at it, and you better make the best of it the first time around.

DeMarcus Curry: So whatever you do in life, regardless of who you are, make sure that you’re making a positive impact not just on others but also on yourself cause that’s what people are going to remember you of, by the things that you do. And that’s what you want to be remembered as, as being a positive person in your community.

Judge Castlen: Little by little I hope that people step up. And I hope we see more people walk up behind defendants in the courtroom and say, “Judge, this is a good man. This is a good woman. Let me see what I can do”. I don’t know if it will happen, but I hope so. I hope he inspired enough people to do that.

Mareea Thomas: Through these conversations I found that Rev. Ron Holmes will continue to impact the community despite his death.  The piano music you heard was played by DeMarcus Curry.

When he ­­finished playing he said, “That’s the first song he taught me”. 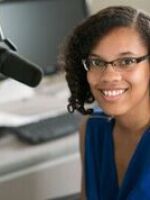 Mareea Thomas
Mareea Thomas is a radio host at 88.3 WNIN FM and co-producer of WNIN’s bilingual podcast, ¿Qué Pasa, Midwest?. She earned a Bachelor of Arts degree in communication and a Spanish Minor from the University of Evansville. Mareea first developed an interest in radio while DJing a variety of shows at the university’s radio station. She has been recognized by the Kentucky Associated Press for her work.
See stories by Mareea Thomas